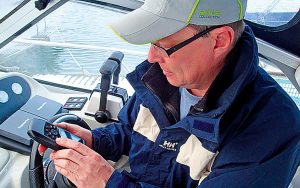 We take a look at 6 of the best boat GPS options available right now, from handheld devices to tablet apps

‘Lost at Sea’ might be a great name for a video game, but in real life the prospect of losing one’s bearings on the ocean can be pretty scary indeed.

Chartplotters can – and sometimes do – fail, (it’s happened to this writer), leaving you alone with a compass and, if you’ve prepared, a set of charts to guide you to a safe haven – assuming you know, or can remember, how to navigate manually, that is…

And that, in a nutshell, is why many mariners today choose not to leave port without a backup or secondary system aboard.

Happily, reserve navigation aids no longer need to be big to be beautiful as now there’s a range of powerful pocket sized devices available which put GPS technology in the palm of your hand – literally.

What’s more, these devices come in a variety of forms and formats, such as purpose-built handheld boat GPS units, GPS-equipped VHF radios and smartphone/tablet-based app setups.

Incidentally, just a note on those phones and tablets: If you’re planning to use one as your primary navigation tool, do bear in mind battery time is sure to be compromised by any power-hungry application.

While handheld GPS systems are intended more to complement chartplotters rather than replace them, there are certain tasks where they leave fixed units standing.

Consider, for example, overnighting at anchor. If the boat’s chartplotter is helm-mounted there’s a good chance the cabins will be out of earshot of its anchor-drag alarm.

A handheld, however, can join you at bedtime and, should the need arise, will disturb your slumber with an alarm that will send you dashing up to the deck at the double to see what’s going on. And that alone could be a factor to persuade many boaters to consider investing in a handheld GPS system.

Here’s our selection of six of the best boat GPS systems on offer today.

Garmin dominates the purpose-built handheld boat GPS market and its GPSMAP 86i unit very much represents the state-of-the-art. Bristling with features, including a 3″ display which is bright enough to be readable in sunlight, the 86i has an IPX7 rating meaning it can withstand exposure to 1 metre of water for up to 30 minutes.

This boat GPS unit supports Garmin’s BlueChart g3 charts and is capable of streaming boat data from compatible plotters and instruments to place important information in your hand no matter where on the boat you happen to be. The 86i also doubles up as a satellite phone via the inReach network, for which a separate subscription is required.

Before we get into which are the best chartplotters or MFDs, it is worth briefly noting the difference between the…

Icom’s IC-M94DE VHF radio puts power in your hand in a number of ways. For in addition to GPS, it has full DSC functionality and is the world’s first marine handheld VHF to incorporate a built-in AIS receiver.

The GPS part of the package allows the user to store up to 50 waypoints. While the unit’s navigation capabilities are limited, what the M94DE can do is provide a much needed confidence boost for anyone who finds themselves at sea without an alternative nav system.

That’s because the radio’s navigation function guides the user to the selected waypoint and provides a reassuring beep once it has been reached, thereby confirming the boat’s position at sea.

Buy it now on CactusNav.com

With its bright colour screen and IXP7 waterproof rating, Garmin’s GPSMAP 78 is a great handheld boat GPS choice. Ruggedly constructed with moulded rubber side grips, the unit feels good in the hand.

That said, should you manage to drop it in the briny, fear not – it floats. The GPSMAP 78 has a sensitive WAAS-enabled GPS receiver which locates its position quickly and efficiently once switched on.

It’s supplied with a worldwide basemap which can be added to by simply plugging in a pre-loaded Garmin BlueChart g2 map. And when you’ve finished having fun on the water, the boat GPS unit connects to your PC and the internet for a detailed analysis of the day’s action.

Similar in principle to the Icom M94DE, but costing considerably less (due to no AIS receiver) Standard Horizon’s GPS-equipped HX890DE VHF radio is capable of storing up to 250 waypoints.

Another factor well worth bearing in mind is that this radio does routes. Up to 30 waypoints can be tagged to create a passage, which can then be followed automatically or manually.

Setting all of this up can be somewhat burdensome, especially given the screen size is just 1.7″ square, but once programmed the routing functionality of the HX890E could well make the difference between a relaxed or stressful journey.

The Garmin GPS 73 is an easy-to-use handheld navigator. The unit can mark and store up to 1,000 waypoints and 100 tracks, making return navigation simple.

It also features SailAssist, which is designed to help the user sail more efficiently with a heading line and tack assist, which essentially lets you know when to tack.

Other in-built features include sunrise/sunset, estimated time of arrival and various marine data. The relatively low price point reflects the fact that the GPS 73 boat GPS comes with a monochromatic display. That said, the screen is high contrast and can be read in all lighting conditions. There’s also a built-in back light for operation after dark.

Navionics is a Garmin brand, so the charts used by its Boating Marine and Lakes app will look familiar to existing Garmin plotter users. Compatible with both Android and Apple devices, this popular boating app can be downloaded from Google Play or the App Store.

Once installed, maps are downloaded and stored on your device, allowing offline access at all times. As you would expect from anything to do with Garmin, the app has a multitude of features, including tracks, routing, dock-to-dock autorouting, tides and weather information and SonarChart, which provides high definition bathymetric mapping.

What’s more, Navionics’ charts are updated up to 5,000 times a day and the system embraces community edits to ensure valuable local information is kept up-to-date and relevant at all times.