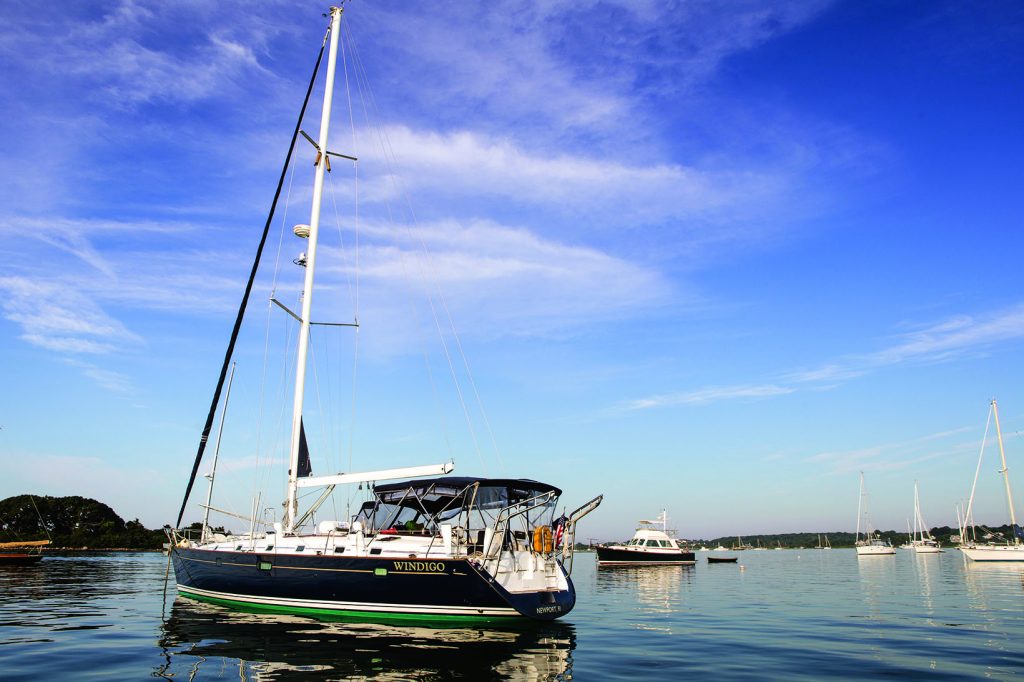 Take time out for a visit to this big, two-hearted river at the mouth of Buzzards Bay.

For such a large estuary, the Westport River can be surprisingly hard to find. From the ocean, the surrounding coastline looks unbroken, and it’s only as you draw closer that the inlet reveals itself between Horseneck and Elephant Rock Beaches. Once inside, you’ll find yourself in a serene and beautiful waterway that combines a relatively deep harbor with shallow-draft cruising among undeveloped shorelines, vast marshlands, meandering tidal creeks and small villages. The river’s sprawling salt marshes are host to myriad birds, fish and other wildlife, and along many stretches the houses are few and far between.

A lovely catboat rests on her mooring on the Westport.

The entrance to the river is well marked and relatively deep, with a sandy bottom, but it should be approached with caution, especially on a southwest wind and outgoing tide. Stay between Half-Mile Rock and the Knubble, and be careful of the current, which rips through the entrance, occasionally creating standing waves at the mouth.

Immediately to port as you enter the river is a fine anchorage behind the rocky point known as the Knubble. Here you can drop the hook and a dinghy to the nearby beach, walk to the stone tower or visit the beach on the south side of the point. Or you can head inland and wander among the picturesque cottages.

The Westport is homeport to a small commercial fishing fleet.

A few hundred yards north of the inlet, the river splits to form the East and West Branches of the Westport. To reach the main part of the harbor, follow the buoys around Bailey Flat and Corys Island and you’ll soon see the docks of F.L. Tripp and Sons boatyard and marina to starboard. This is the best place to secure a transient mooring (marked with yellow floats at the west end of the harbor) or slip, and the marina staff will even pilot you through the inlet if you are hesitant about the approach. Tripp’s fuel dock offers gas, diesel, ice, free pump-out (the river is a no-discharge area), and a marine store. Repairs of all kinds are available during normal working hours, and the laundry and shower facilities are open 24/7.

Osprey nests can be seen all along the Westport River. Photo Tom Richardson

Before or after, you can dock-and-dine at the popular Back Eddy restaurant, which serves Portuguese and American cuisine made with fresh, local seafood and produce. The restaurant also has an outdoor deck and bar, where patrons can enjoy a drink and watch the sunset while they wait for a table. Dockage for small to midsize boats is sometimes available at the end of the pier, although it’s best to have an alternative plan for your boat, especially on a weekend evening.

A trio of anglers heads downriver.

Opposite Tripp’s, the West Branch of the Westport extends north to Adamsville. If you have a relatively shallow-draft boat, kayak, canoe or dinghy, you can head upriver to Adamsville Landing. From here, a short walk will bring you to the village, where you can grab a coffee and pastry or a sandwich at Gray’s Daily Grind and check out the grist mill museum next door. Gray’s also carries locally produced honey and jams, as well as locally published books, crafts and gifts. If you’d prefer a big sit-down breakfast, you can fill up at The Barn restaurant before exploring the rest of the village, which features a liquor store and a post office.

Head a little farther east of Tripp’s and you’ll come to historic Westport Point, which features another small mooring field in the shadow of the Route 88 bridge. “The Point” was initially settled in the 1700s, and town residents used the surrounding islands and beaches as pasturage. By the 1770s, the Point was host to a saltworks, located on its east side, and served as home base to a fleet of whaling ships in the mid-19th century, with as many as 20 or 30 vessels at a time working out of the harbor. Before Route 88 was built, the Point was the site of a ferry then a bridge to what is now Horseneck Beach. If you’re looking for a comfy bed for the night, the Paquachuck Bed & Breakfast is located at the end of the Point. It has a dock and offers a great view of the river.

The Westport is homeport to a small commercial fishing fleet.

Beyond the Route 88 bridge, the East Branch of the Westport meanders among islands and salt marshes in two directions: southeast behind Horseneck Beach and East Beach, and north to Head of Westport. If unfamiliar with the river, it’s best to explore this stretch in a shallow-draft boat or kayak, as the channel twists and turns, and the river can be quite shallow in many spots.

Follow Horseneck Channel deep into the marshes east of the bridge in a kayak or canoe and you’ll enter osprey central. (Note: this trip is best made early or late in the season, after the greenhead flies have abated). The vast marshes were one of the first areas to see a recovery of the osprey population, following the ban of DDT pesticide in the early 1970s. Aside from osprey, you’re also likely to encounter blue and white herons, egrets, ducks, kingfishers, hawks and other birds as you paddle through the maze of tidal creeks.

An osprey alights on its nest in the salt marsh of the lower Westport.

If you choose to head north along the East Branch, your journey will take you past wooded shores, vineyards and farmland. There are also several spots on the Spectacle Islands and Big Pine Island where you can go ashore for a picnic. At Hixville Bridge, you can beach your boat, canoe or kayak at the launch area and walk the short distance to Westport Rivers Vineyards and the Buzzards Bay Brewing Company (pictured at left) for a tour and a tasting.

Continue north a couple more miles and you’ll arrive at the Head of Westport. Once known as Westport Village, this area has been home to Native Americans for centuries, and was first settled by Europeans in 1671. The strong current here supported a large number of mills, and later a shipyard. By the mid-19th century, Head of Westport had become largely residential, and is a wonderful place to land and spend some time walking around.

The Westport Historical Society has its headquarters on Drift Road, just south of the town landing. The landing itself serves as a picturesque picnic spot, flanked by historic properties. A stone’s throw away is Osprey Sea & Surf Adventures, which offers guided trips and classes in all sorts of paddle sports, while across the street you can find ice cream, coffee, award-winning donuts and penny candy, along with basic groceries, at the Head Town Landing Country Store.

It’s just one of many surprises that await the adventurous Westport boater, who will find himself in good company. Over the years, the river has harbored privateers and bootleggers, shipwrights and farmers, and it continues to reward modern mariners with its host of hidden treasures.

Kayakers set off from the Head of Westport.

WESTPORT AT A GLANCE

Launch Ramp
A state ramp suitable for large boats is located near the base of the Route 88 bridge over the Westport, adjacent to the Back Eddy restaurant. There is ample and free parking at the ramp and in an overflow lot nearby.

THINGS TO SEE & DO

Gray’s Grist Mill Museum
(508) 636-6075
See how corn is ground, and pick up fresh-ground meal, at one of the oldest, continually running grist mills in New England. Located in Adamsville.

A family enjoys the sunset from the docks of the Back Eddy restaurant.

Dining on the deck of the Back Eddy.Content extracted from https://newenglandboating.com/westport-rewards/