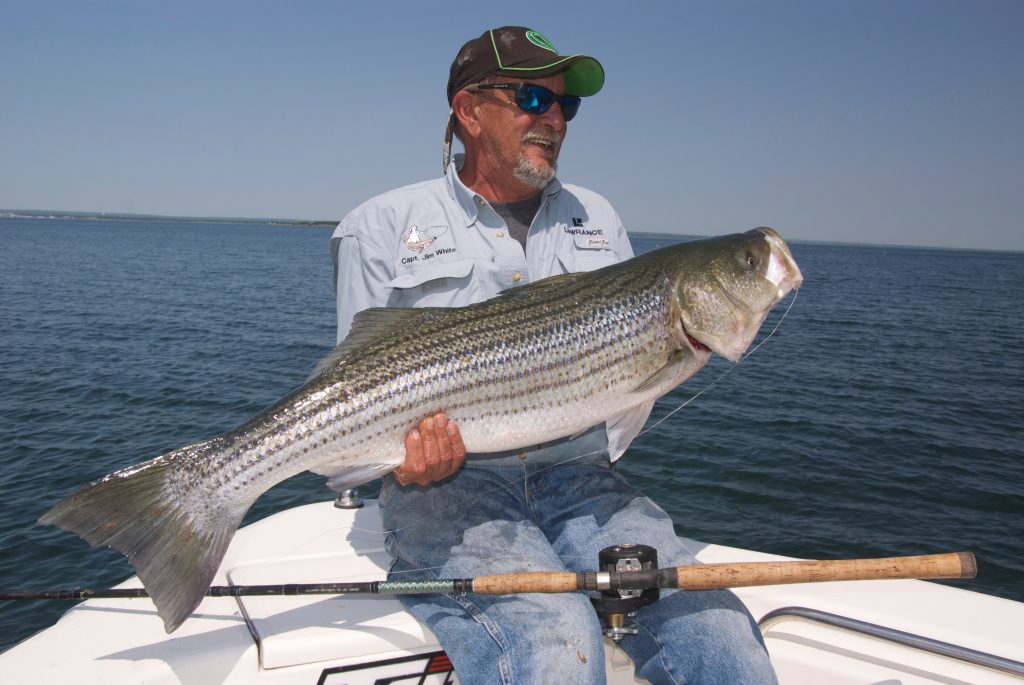 Former guide Jim White has long been regarded as one of the top fishermen in Rhode Island. He has been fishing the state’s salt and fresh waters since he was a kid, and has spent the last 20 years guiding anglers out of his home port of East Greenwich. While White is perhaps best known for his expertise in catching big stripers on flies and soft-plastics, he also knows how to score with live bait, which he proves in the accompanying video.

My trip with White and mutual friend Mike Laptew took place in late-May—prime time for scoring with big bass in Narragansett Bay. While plenty of trophy fish are caught on light tackle at this time, live menhaden (aka, pogies, bunker) greatly improve your chances of hanging a 30-plus-pounder.

We found the bunker schools in the Providence River, just south of the capital, and spent a few minutes snagging some for the live well. When we had eight or nine baits, we headed south to an undisclosed location and let one drift behind the boat. In a few minutes we had a customer—a healthy 20-pound fish, which we released.

Things grew quiet on the bunker front after that, but we continued to take smaller fish by casting soft-plastic Fin-S-Fish tight to the shoreline while the live bait swam behind the boat. Thanks to a light north wind, we were able to cover a large stretch of shoreline without starting the engine. The most remarkable thing was that we were raising fish in five feet of water, in broad daylight.

Shortly after moving to a new spot, our second-to-last bunker of the day was devoured. After fighting the fish for a few seconds, White knew it was a big one. And he was right. That 31-pounder made a great ending to a great morning on the bay!