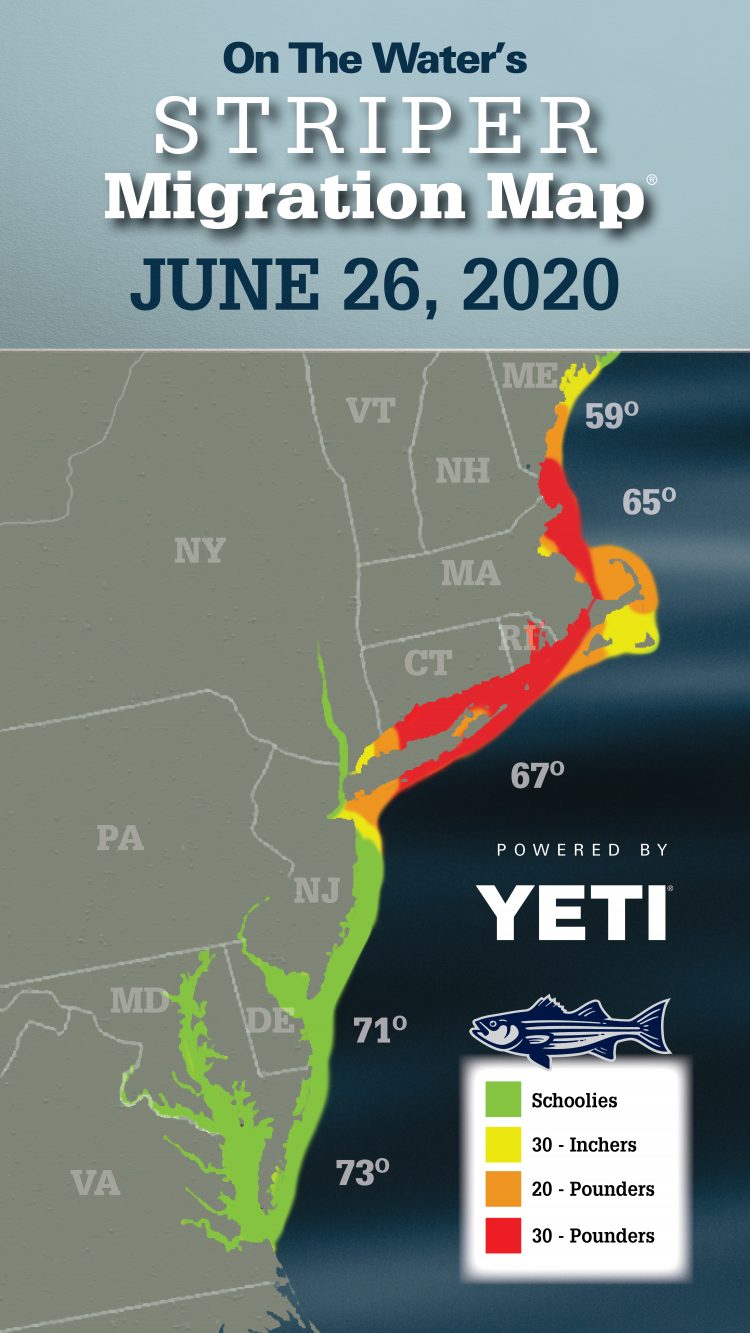 In year’s past, by the end of June, the Striper Migration map looks mostly the same. Spawning-size, 30-pound bass have migrated north and are available pretty much from Long Island, NY to southern Maine. Of course, they are always more prevalent in some areas than others, but it was honest enough to color a wide swath of the map red and highlight the best bites in places like Western Long Island Sound, Montauk, Block Island, the Cape Cod Canal, Race Point, Boston Harbor, Cape Ann, etc. This year seems a bit different. There are many swaths of the ocean where 20- to 26-inch bass are super-abundant and there are some 30-inch-class fish, but fish over 20 pounds appear absent.

As such, the striper migration map is a blotchy mix of colors – our best attempt to show that while spawning class stripers have migrated north, they haven’t really spread out as much as we have grown accustomed to. There are two likely explanations for this. One is that it reflects a change in migration patterns due to water temperatures, bait availability (such as the big numbers of menhaden), or some other natural factor that is concentrating the schools of particularly big, 20, 30, and 40-pound-plus stripers in more discrete areas. The other is the reality that there are fewer large striped bass in the population than in past years. Most likely, it is a combination of these two factors.

Next week will be our final update to the 2020 migration map. Please share your observations in the comments below and let us know how this spring has stacked up to seasons past.

Maryland DNR has begun reporting their Striped Bass Summer Fishing Advisory Forecast, aimed at reducing striped bass mortality during the summer fishing season. A color-coded recommendation system allows anglers to plan their striped bass fishing trips up to seven days in advance. As bay water temperatures climb into the 80s and deeper waters may be impacted by plankton bloom die-offs, this information will be very important to anglers wishing to conserve the striped bass resource in Maryland.

Striped bass fishing has slowed with rising water temperatures in southern New Jersey and anglers are targeting other species. Off northern New Jersey, there are schoolies along the beaches. Big bass have mostly moved out of Raritan Bay, but boats working toward New York waters are still catching a few big stripers.

On Long Island, big post-spawn bass to 50 pounds have spread out in Long Island Sound and along the south shore as they feed on abundant bunker (menhaden). Big bass are most prevalent from Shinnecock to Block Island.

Big bass are spreading throughout Long Island Sound, and stripers to 40-plus pounds are setting up on the reefs outside Narragansett Bay and around Block Island.

Big bass to over 40 pounds were caught in the Cape Cod Canal this past week. Bass over 30 pounds have been tough to locate with any consistency around Cape Cod, but there are good numbers of schoolies and fish in the 30-to 40-inch class. A big slug of 30-pound-plus stripers have moved into waters off the South Shore, outside Boston Harbor and north to the Merrimack River.

Huge schools of menhaden (pogies) have drawn in big stripers to New Hampshire and southern Maine waters, with fish to 40 pounds reported this week, along with big numbers of 24- to 34-inch bass.