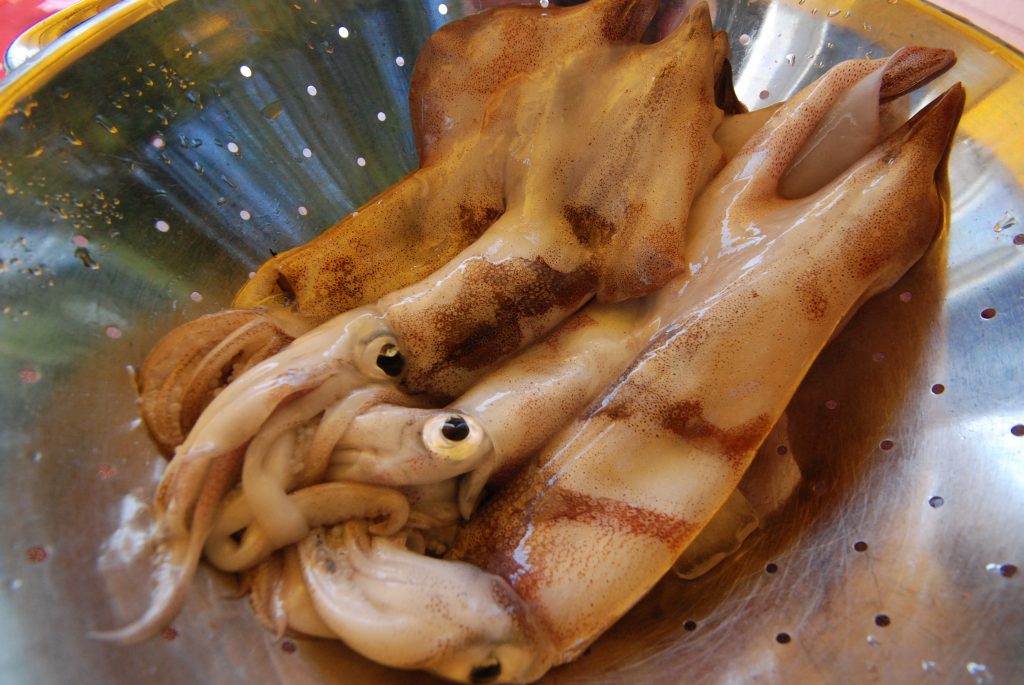 Spring is squid time in New England. When the water temperature reaches the 50-degree mark, the marine mollusks migrate inshore and gather in the sounds, bays, coves and harbors to breed and feed. Once their predators (namely bluefish, fluke, sea bass and striped bass) catch up and the water begins to warm, the squid schools move deeper, although the occasional pod can still be found inshore through the season.

During the day, they typically gather near the bottom in water ranging from 15 to 30 feet, often in depressions, along the edge of a shoal or drop-off, or over some kind of hard structure. In this situation, you can catch them from a boat by working a squid jig just above bottom. Birds (especially diving gannets) and other squid fishermen will often give away the presence of the schools. Once you find a concentration of squid (watch your depthsounder for haystack-like marks near the bottom), work the area by drifting along and vertical jigging with several squid jigs. When you hook a squid, mark the spot on your plotter so you can return to it.

Another way to tell if the squid have arrived is the presence of commercial squid trawlers. The trawlers generally work sand-bottomed areas in open sounds, such as Vineyard and Nantucket Sounds. Also, when you start to see signs for “Fresh Local Squid” in your neighborhood markets, you can bet the squid are in.

While you can catch plenty of squid during the day if you have a boat, nighttime gives the shore fisherman a shot at success. After dark, squid gravitate toward any source of light, because that’s where baitfish (namely silversides) tend to gather. Lighted docks, wharves, piers, bulkheads and bridges are all great spots to look for squid after dark, although some spots tend to hold more squid than others. You can generally recognize these places by the number of hardcore squid anglers they attract.

Fishing for squid is easy, but a bright light is key. Many squid fishermen bring their own portable lights, which they run off a generator, battery, or their vehicle. If the dock, pier, or wharf has electrical outlets, you’re really in business! Aim the light or lights toward the water and wait for some bait to gather.

Sometimes the squid will show up immediately; other times you’ll have to wait until a school swims past. And sometimes they never show up. Keep a close eye on the water below. Often you’ll see the squid lurking in the shadows around the edges of the light, waiting to pounce on a hapless baitfish—or your lure.

A variety of squid jigs will get the job done. Pack them in different weights and colors. Photo Tom Richardson

To catch squid, all you need is a light spinning or baitcasting outfit and a squid jig. These oblong lures feature a “skirt” of upturned spikes and come in a variety of colors, sizes, weights and styles. They are available in most saltwater tackle stores or through Amazon. Jig color can make a big difference, so bring a wide selection. Weight can be important too, as sometimes the squid like to hold near the bottom. Other times they prefer a nearly weightless jig that just suspends in the water.

A good, basic rod-and-reel setup for jigging, day or night, is a light spinning outfit spooled with light line. Tie the squid jig to the end of the line and you’re good to go. No need for a leader here.

If you’re trying to catch a lot of squid in short order, go with a heavier rod and line and use multiple jigs on the same leader. Tie a series of two-inch-long dropper loops, spaced 6 to 12 inches apart, in a three- to five-foot mono leader. Attach one end of the leader to the main line via a barrel swivel. Lastly, tie a small bank sinker to the end of the leader and secure three or four jigs to the dropper loops.

Jigging action can be critical to success, and often you’ll have to experiment with numerous techniques until you find the right one. Daytime fishing usually requires a “yo-yo” jigging action, where the jig is lifted a foot or two off the bottom and allowed to free-fall. At night, the jig can be cast out away from shore and free-spooled until nearly out of sight, then lifted smoothly toward the surface. Sometimes you can score by simply jigging the lure directly below the spot where you’re standing. And sometimes simply allowing the jig to dangle at the end of the line works better than a more active presentation. Again, experimentation is key. If you have two people jigging at the same time, start by having each person use a different action or fish a different depth until you find the combination that works.

There is no need to set the hook when using a squid jig, as the squid’s numerous sticky arms will become entangled on the spikes. Just lift the rod gently and reel steadily to keep the squid attached as you bring it to the surface. Once you lift the squid from the water, hold it above the surface for a few seconds so you don’t get “inked.” To remove the squid, jiggle it over an open cooler or bucket until it falls off the jig.

If you plan to eat your squid, cover them with ice to better preserve them, then get them home and clean them. If you intend to use them as bait, place four to five squid in individual sealable bags and pop them in the freezer for use throughout the season.