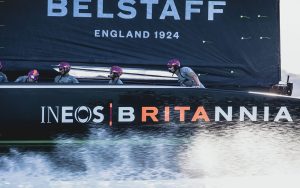 INEOS Team UK goes from zero to hero as Ben Ainslie and his team take victory in both opening races of the Prada Cup, day one.

What a difference three and a half weeks make! INEOS Team UK have gone from being a team that were borderline embarrassingly slow in the America’s Cup World Series in December 2020 to a team that looked unstoppable, winning both races of the Prada Cup day one in Auckland.

The racing for the Prada Cup, which will eventually select the challenger for the America’s Cup itself, starts with a round robin series with each of the three challengers racing each other on four occasions.

Today, Friday 15th January 2021, saw the opening two races as INEOS Team UK took on American Magic in Race One and Luna Rossa Pirelli Prada in Race Two, both sailed in medium conditions with around 15-17 knots at the windiest, top end of the course.

How has INEOS Team UK improved?

The big question on everyone’s lips will be how has this team managed to go from zero to hero in such a short space of time? This being the America’s Cup there will be those that wonder if they were deliberately sailing slowly in previous events to throw other teams off the scent. But the answer is likely much more mundane.

It is no secret that the Brits have spent a lot of time and energy developing their AC75 in recent weeks, with their base in Auckland regularly seen with the lights on throughout the night as the shore team desperately made modifications to their boat.

The two wins, then, are as much down to the hours put in ashore as they are to the sailors onboard. Ainslie was quick to acknowledge this fact. “That race was for the rest of the team back at the dock, our shore team, our engineers and for our friends at Mercedes GP who have all worked hard to turn these things around,” the five-time Olympic medallist said at the end of Race One, repeating the dedication after their second win of the day.

In Thursday’s press conference, Ainslie made no secret of the extent of the surgery that had been performed on their AC75 to get it to this stage: “The team has been working flat out since the World Series and we think we have improved a lot from where we were,” he said.

“We have brought a lot of new parts online including a new rudder, new rudder elevator, new mast, new mainsail, and new headsails. Then alongside that we have made modifications to our foils, to the aero package on our hull and we have changed the systems inside the hull. We knew our development from the World Series would have to be significant and we have certainly been busy.”

However, hidden within this good news are some warnings for the future. These races were conducted in much stronger winds than we saw in the America’s Cup World Series.

Ainslie was keen to stress at all opportunities that they were quick in these conditions, but said they still have a lot of work to do in the lighter wind range. The wind should get ever lighter as the event progresses through the rounds of the Prada Cup and on into the America’s Cup itself.

The course today was heavily favoured to the right hand side with much stronger winds all day making it the clear favourite option.

In race 1 INEOS Team UK and American Magic did not engage much. Both boats ended up in a drag race to the line, with INEOS getting the windward position and perhaps a couple of meters ahead of American Magic, steered by Dean Barker.

From this position the Brits were able to tack early to the right while Barker and his team went all the way to the boundary. By the time the two boats converged again INEOS had stretched out a decent lead, and proceeded to keep heading back to the right, protecting the favoured side.

INEOS Tactician Giles Scott and Ainslie made solid calls all day to protect their favoured side and sailed a tactically flawless race to increase their lead at all mark roundings to eventually win by 1 minute 20 seconds.

American Magic, once forced to the unfavoured left struggled to find any chink in the Brits armour with every split they made to the left losing them ground, but short of following the Brits round the course there were few other options for them.

“Nothing changes for tomorrow, we’ll look back at the key moments and try to understand how we might have executed better. There are a couple of key areas that ended up being the difference, but in these boats, you just can’t give anyone else any advantage,” Barker concluded.

Can the Kiwis be beaten for the 36th America’s Cup? They must be on short odds already, three months out…

The teams are there, the boats are there, and it won’t be long before the racing starts in the Prada…

With the first race confirming the clear favourite side of the course, the start sequence for the second race looked set for a battle royale between Ainslie and Jimmy Spithill (who sailed together to win the 2013 America’s Cup).

Luna Rossa Pirelli Prada has a slightly different setup to the other teams in this America’s Cup with Spithill helming when the boat is on starboard and Francesco Bruni when on port. As such the start is largely Spithill’s domain (rightly so as the Australian is known as ‘The Pitbull’ for his starting prowess and aggression).

With Luna Rossa approaching the startline on starboard, INEOS tacked dead in front of them and it briefly looked like the Italian boat might be able to get underneath the Brits, luff them and force them off their foils, but they never quite made it and with both boats now late for the start, the Brits were able to lead back to the start, tack and cross the line on port, leading out to the favoured right hand side.

“We were on time to the start and we thought we might have a shot at a hook, but then we had a big left shift,” explained Spithill of the start. “So we went from killing time, to racing, to being late and then they gave no opportunities to get past.”

This is as succinct a report of the race as it is possible to give. Once again the Brits perfectly protected the right, with Scott and Ainslie getting their tactics spot on. For their part, Luna Rossa managed to do a better job than the American’s had at staying in contention by finding space in behind the Brits on the right, but it was ultimately to no avail.

Having remained close for much of the race, they were eventually forced out to the left in the final lap in the hopes of finding some way past but this simply served to drop them from 13 seconds back at the final gate to 28 seconds behind at the finish.

There will be another two races on Saturday 16th January and then two more on Sunday 17th.

Saturday will see American Magic taking on Luna Rossa Pirelli Prada in the opening race and INEOS Team UK in the second.

Sunday’s racing will see Luna Rossa Pirelli Prada face the Brits in the openener and the Americans in the second.

The forecast is for slightly lighter wind, so we should start to get a clear idea of who’s fast in which conditions. Luna Rossa in particular are said to be quick in the lower wind range, so it will be interesting to see if Spithill and Bruni can make the most of their two races on Sunday.

As for the American’s, they have been spoken about at the strongest challenger in some circles for many months. They will have an opportunity on Saturday to get two winds on the board and Barker will be fired up to come back from today’s loss.

This is a long way from over…

If you enjoyed this….

Yachting World is the world’s leading magazine for bluewater cruisers and offshore sailors. Every month we have inspirational adventures and practical features to help you realise your sailing dreams.
Build your knowledge with a subscription delivered to your door. See our latest offers and save at least 30% off the cover price.