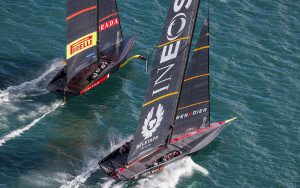 With a compromised boat, Ben Ainslie’s British team took yet another win in the Prada Cup day four, but it was a long way from an easy win, with the team pushed from the off by Luna Rossa Prada Pirelli.

A casual glance at the results of the Prada Cup day four, will show another win for INEOS Team UK, making it five wins from five races. But as is so often the case in sport, the result tells only a fraction of the story, and today could well have ended with a win for either team.

It was a tense affair from the off with gusty shifty conditions promising a thriller in Auckland as Luna Rossa Prada Pirelli and INEOS team UK set out to see if the Italian team could prevent the Brits from marching through to the Prada Cup Final, one step close to the America’s Cup itself.

Whichever team does not make it through will face American Magic in a Semi-Final, first-to-four-wins shootout (assuming the Americans can rebuild their boat in time for the scheduled racing following their capsize last weekend).

Those outside of New Zealand who woke early (or stayed up late) to watch the racing were subject to a long delay as the race committee tried to set a course in winds that were shifting significantly to port and starboard.

For their part, the teams looked torn as to which headsail might be best for the conditions that were gusting from around 11 up to 17 knots. Significantly, INEOS Team UK looked to be attempting to fix an issue with the cunningham of their mainsail.

Finally, with a course set, a new startime approaching, and with little other option, the Brits were forced to lock off their cunningham into a single position, which would significantly hamper their downwind speed, preventing the team from making the sail deeper and so more powerful when they turned away from the wind.

After the first AC75 racing we saw in the America’s Cup cycle, the British team looked to be in trouble…

The teams are there, the boats are there, and it won’t be long before the racing starts in the Prada…

“It’s just like sailing any other boat, like in a dinghy, if you’re sailing your Laser upwind with the cunningham wound on, you are okay, but downwind you lose a lot of power. So Bleddyn [Mon, mainsail trimmer] did a good job of finding power downwind today,” Ainslie said of the problem after racing.

With a compromised boat and reported developments to Luna Rossa in the last week to improve their speed, it looked as though the Brits were in for a tough day of racing as the start of the Prada Cup day four fast approached.

The pre-start of the Prada Cup day four gave a taste of the action we could look forward to for the rest of the race, with Jimmy Spithill and Francesco Bruni (who share the helming role on Luna Rossa Prada Pirelli) coming back to the start a touch early, allowing the Brits to tack in behind them in a strong position. However, an aggressive luff from Spithill forced the Brits off their foils.

INOES Team UK quickly recovered to get foiling again but any advantage was lost and the boats crossed the startline relatively evenly with INEOS fractionally to windward.

The Brits were forced to tack early while Luna Rossa went all the way to the port boundary and managed to eke out a decent lead.

As the British team came back on starboard Luna Rossa tacked dead in front of the Brits in an aggressively defensive move, but a poor tack looked to have cost them the lead.

However, not for nothing is Spithill nicknamed ‘the pitbull’ and he just about managed to swerve Luna Rossa to windward at the right moment forcing the Brits to tack away or likely concede a protest as the windward boat without rights.

In the America’s Cup of old, to report on the racing was to analyse in great detail any lead change that might occur – these being the pivotal moments that hand one team or the other the advantage that accounts for victory. Today was not a day for the minute details, with action coming thick and fast throughout the short race in a no-holds-barred, gloves-off contest.

Whatever your thoughts on this new style of super-fast foiling match racing (and, cards on the table here, I love it!) you’d struggle to make any reasonable argument that this is other than thrilling.

In total, the lead changed hands nine times over the three lap race of the Prada Cup day four, with neither boat getting any significant lead over the other at any point. The time difference at each gate, rounding probably best tells the story of a race that had viewers with their hearts in their mouth throughout.

For all the effort of the teams, all the windshifts read correctly, the imperfect manoeuvres, the tactical mastery, it all came down to the final leg. And what a final leg it was.

The Brits rounded the final gate with a 1 second lead and took the right hand mark (looking upwind). The Italians, the left mark and immediately gybed. After their gybe at the righthand boundary the Brits crossed ahead of Luna Rossa with starboard right-of-way advantage, but this left Luna Rossa to make the best of the favoured side of the course for a little longer and with the starboard tack advantage.

When the Brits gybed back they would be on port without the right of way… and it was going to be close. Very, very close.

With both boats gybing, it initially looked like the Brits would make it clear across the bow of the Italians, but Spithill saw the situation unfolding in front of him and started to drive his boats as low as possible, trying to force a port/starboard penalty. The Brits responded, driving low too but, with their broken cunningham hampering the amount of power they could generate downwind all day, they slowed more than the Italians.

It was heart in the mouth stuff as Luna Rossa came at the Brits but, ultimately, they just could not get deep enough to sell the port starboard incident to the jury who, following a protest from the Italian team, called ‘no foul’.

Having put all their eggs in that one basket, Luna Rossa looked to briefly to get unstable on their foils and that was it, game over for the Italian team.

Spithill will, no doubt, go to his grave claiming the penalty should have gone their way, in the final leg of the Prada Cup day four, and Ainslie will go to his claiming the opposite. It was tight for certain, but the tell is Luna Rossa’s loss of foiling stability as they desperately tried to get low enough to make it look like a penalty. They did not need to luff slightly to avoid the Brits, they needed to, to keep sailing.

“For us, we definitely had a piece of them,” said Spithill of the moment at the end of the race. “When we’re both doing 45 knots and we had to avoid him, I was pretty surprised [the jury] thought that was not close enough.”

For his part Ainslie acknowledged how close it was: “It looked good out of the gybe and all the way across. We both went for a soak mode, but theirs was better than ours with the cunningham off, but I did think we were just across,” he said.

On these fine margins rests the fate of teams who have been building towards this event for the better part of four years, and who have spent £100s of millions in order to claim what is one of the toughest trophies to win in sport.

Today, Ainslie and his British team once again proved their prowess. With five wins and no losses they will go straight through to the Prada Cup Final ready to fight whichever of Luna Rossa Prada Pirelli or American Magic make it through the Semi Final racing, which starts next week.

And from there, the Prada Cup Final will select which team gets to go up against the all-powerful Emirates Team New Zealand to fight for the ultimate prize in sailing. If today’s racing is anything to go by, we’re in for a thrilling few weeks.

If you enjoyed this….

Yachting World is the world’s leading magazine for bluewater cruisers and offshore sailors. Every month we have inspirational adventures and practical features to help you realise your sailing dreams.
Build your knowledge with a subscription delivered to your door. See our latest offers and save at least 30% off the cover price.