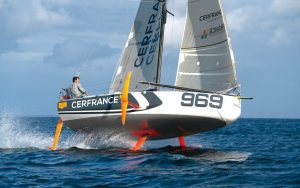 The Pogo Foiler is a production prototype, designed to create an off-the-shelf Mini 6.50 that can compete in the experimental prototype class. François Tregouet reports

Since the Pogo 1 was launched in 1997, the Pogo Structures yard in Brittany has won ten out of the last 12 Mini Transat 6.50 races (the single-handed transatlantic race in 21-footers) in the Production class. Even more impressively, the Pogo 3 has not only won the Production fleet but also finished hot on the heels of the Prototype class many times.

This gave the French shipyard the idea of offering a ‘production prototype’, or a best of both worlds design. While it might sound paradoxical, the idea is to offer an alternative for sailors who want to go beyond the level of the production boats, without venturing into developing a complex prototype design from scratch – with a corresponding budget that’s almost impossible to control.

The initial objective was to make it simple and efficient. For simplicity, the Pogo Foiler does not have water ballast, so no pumps, piping and bulky tanks. For performance, the hull, drawn by the much-courted Guillaume Verdier, adopts the scow shape currently in vogue everywhere from the Class 40 to the IMOCA 60s. But the Pogo hull has an optimised wetted surface that is claimed to erase the ‘hole’ suffered in light air performance by some other designs.

The scow bow, designed by Guillaume Verdier, has a chine well above the waterline, reducing the wetted surface in light airs

In addition to the power aspect, the extra-wide bow also significantly reduces the volume of water getting on deck, and makes it safer to move around on the foredeck: two appreciable benefits when you’re mid-Atlantic, single-handed, aboard a boat only 6.50m (21ft 4in) long.

The big decision made by the design team was to make their Mini fly, which means it has specific appendages. Even though the keel is not the most complex possible, it is still both tilting and telescopic. The Mini class operates a box rule, limiting the maximum draught to 2m (6ft 7in). Prototype class Minis have for several years used rams to adjust the keel’s position when tilted. This lowers its ballast compared to a conventional pendulum keel, thus improving the boat’s righting moment.

At higher speeds, when canted to its maximum, the lifting effect of the keel is working in opposition to its ballast effect: optimum performance is, therefore, not necessarily achieved with the keel fully tilted, but slightly ‘under-keeled’. This is a subtlety that’s also been observed on the Volvo 65s and IMOCAs, and is a good illustration of the very high level of performance achieved by this little racing machine.

It’s a grey and wet February day on the pontoons at Port la Forêt, the Mecca of French single-handed ocean…

But what’s really unique about the Pogo Foiler is undoubtedly its foils. Whereas most IMOCA boats have been developing ‘Dali’ foils, here the architect and engineers have chosen T-shaped foils similar to those of the AC75 flying monohulls of the next America’s Cup.

The Mini rules mean that they have to fit within the maximum 3m width when retracted: so their shape, and location just forward of the point of maximum beam, are designed to make them easy to stow. The shape means they’re also more compact and better suited to the small size of the boat, providing greater surface area upwind and extending less when downwind.

Where the original intention of simplicity may have got somewhat lost is in the fact that these foils are adjustable in all three dimensions. They can obviously be moved in and out to conform to the widths imposed by the class rule (from 3m when retracted, to 5.4m max beam when both out) and limit the drag of the windward foil; but can also rake – or tilt back and forth – as well as cant up and down.

Once extended the foil can be adjusted both up and down, and fore and aft, to adapt to the speed and sea state

These adjustments are positioned so they can be controlled by a solo skipper without needing to leave the windward helm station. According to Erwan Tymen, head of development at Pogo Structures, the numerous controls require a very high level of precision. As with wind angle, 5° of foil angle difference can equal 5 knots difference in boatspeed, and this has led to a great deal of development work on the sails.

The sails, which have been designed by All Purpose, have to tolerate large differences in speed and therefore in apparent wind angle, such as spinnakers that can deal with being permanently overpowered.

The management of the positioning of the foils is so complex that we weren’t allowed to photograph the mechanism: “We don’t want to be giving any clues to possible future competitors as to the solutions that have been found,” confides Christian Bouroullec, founder and managing director of Pogo Structures.

‘Boomerang’ spreaders to maximise the surface area of the genoa, as seen on the America’s Cup monohulls

His son, Tanguy, is the test pilot for this prototype. Although the Foiler’s development is focussed on getting ready for the 2021 Mini Transat, he took the opportunity of a first real-life test by sailing the development boat in the 2019 Transat, achieving a promising 4th place despite early serious damage to his bowsprit pivot. For the first race Tanguy did not even have the rake setting for the rudders; essential for adjusting the boat’s trim and level for foiling.

The Holy Grail here, as with the IMOCAs, is not to fly high, which leads to big climbs and falls as brutal as they are costly in energy, but regularly, just above the surface of the water. If in big seas the foils act as shock absorbers, the rudders allow for trimming the boat either up or down, similar to an aft ballast tank but without the weight. Both rudders are also lifting, which adds two more lines to the 50 or so (not counting the headsail sheets) already in the cockpit.

The goal is clearly victory in the 2021 Mini Transat, but the project is already a success for the builder. A bit like Formula 1 or rallies for car manufacturers, the Pogo Foiler is a formidable technological showcase for their know-how, a development platform for new resins which have been tested on this prototype and will be used on other models by the brand, and a motivation tool for the teams who have been involved with this innovative and ambitious project.

With the log showing 16 knots at 130° off a true wind of 18 knots, the foil whistles, sending spray in the helmsman’s face, but that doesn’t dampen the excitement of sensations that are closest to those of a racing catamaran. The performance and reliability, if not the simplicity, originally sought by the yard are clearly in evidence.

The economic objective has also been achieved – for the price of about two Pogo 3s you could aim for the top of the prototype category. Put that way, the Pogo Foiler is undeniably the cheapest prototype Mini 6.50 on the market.

François Tregouet is a sailor and journalist from Brittany who has competed in the Mini Transat and cruised all over the world.

First published in the September 2020 issue of Yachting World.