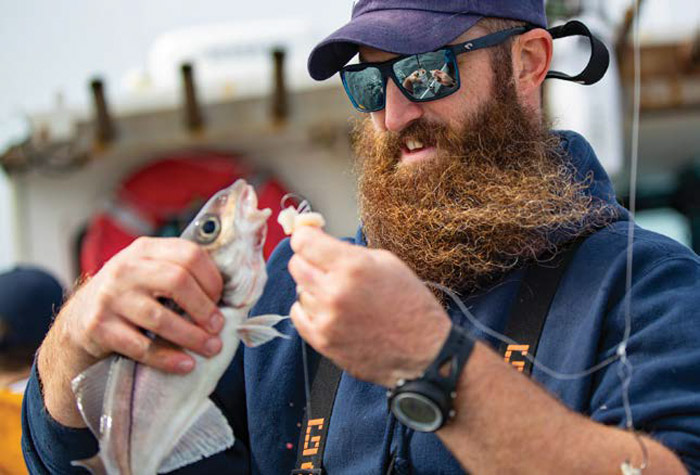 Pictured above: Recent research shows that about 15 percent of released cod don’t survive.

The Massachusetts Division of Marine Fisheries has created a bycatch avoidance tool, for Atlantic cod in the Gulf of Maine (GOM) recreational fishery, in the form of intuitive map products that identify the time and place where the catch rate for cod is low yet legal sized haddock are abundant. Click here to download the maps.

While not many Gulf of Maine bottom-fishermen may be Charles Dickens buffs, few would disagree that he aptly described their predicament in the opening line of A Tale of Two Cities: “It was the best of times, it was the worst of times.”

I’m talking, of course, about haddock and cod.

The haddock story is a happy one and a glowing management success. Haddock abundance in the Gulf of Maine is at an all-time high, as anyone who’s recently dunked a clam on Stellwagen Bank, Jeffreys Ledge, or another well-known groundfish haunt can surely attest.

The outlook for Atlantic cod off the Massachusetts, New Hampshire, and Maine coasts, meanwhile, is equally clear, and it is bleak. The most recent stock assessment indicates that the population is at less than 10 percent of the management target. As a result, the New England Fishery Management Council (NEFMC) has ceased virtually all cod harvest by recreational anglers over the past several years.

But, since cod and haddock eat a lot of the same bait and prefer similar habitats, if you’re catching haddock, you may also be catching cod. While many charter operations that are on the water every day have learned how to better “cleanly” target haddock, the challenge is greater for the occasional private boater, which is why private anglers have been found to be responsible for the lion’s share of the recreational impact on cod.

As painful as it may be for an angler to drop a chunky cod back over the side rather than into the cooler, the fish may end up being even worse off—recent research shows that about 15 percent of released cod don’t survive. Aggregated across all anglers who release cod while targeting haddock, deaths following release account for nearly 30 percent of all fishing-induced mortality, contributing to the continued depleted nature of the stock. To minimize such discards, the NEFMC has implemented haddock regulations that are stricter than what the haddock stock demands, but are needed to help the beleaguered cod.

This conundrum elicits a simple question: Is there a way to help anglers catch more legal-sized haddock while avoiding cod, allowing them to more efficiently harvest an abundant species while minimizing the impact on an overfished one? Scientists at the Massachusetts Division of Marine Fisheries (MA DMF) and The New England Aquarium may have an answer.

The researchers plan to develop maps like this preliminary draft version to indicate areas of high legal haddock abundance but low cod bycatch (green) and vice-versa (red). They will distribute high-quality versions of these maps to anglers in 2020.

Mapping Cod And Haddock Abundance: From Nets To Hooks To Maps

“We’re creating guidance maps to show anglers where they can catch legal-sized haddock without cod, and places you’d want to avoid because they have cod,” explained Micah Dean, Senior Marine Fisheries Biologist with MA DMF and co-leader of the project along with MA DMF Senior Fisheries Biologist Bill Hoffman and Dr. John Mandelman, Chief Scientist at the New England Aquarium’s Anderson Cabot Center for Ocean Life. However, the mapping process is less straightforward than it might at first seem.

As a starting point, the researchers used cod and haddock abundance data from an ongoing Massachusetts government-sponsored groundfish trawl survey that intensively samples the western Gulf of Maine, known as the Industry-Based trawl Survey (IBS).

“The maps show that legal-sized haddock are widely spread across the region, but that the cod distribution is patchier,” Dean explained. With this abundance information in hand, the team next set to work modeling the distribution of each species as a function of three key factors: depth, bottom temperature, and seafloor complexity. The end product was a series of preliminary, month-specific maps that showed promising areas to target (high haddock, low cod) in green and areas to avoid (high cod, low haddock) in red.

Next came the fun part: Validation, also known as fishing. From May through September of 2019, scientists and volunteer anglers sailed seven times monthly to sample both “red” and “green” areas on the preliminary maps. To get to the grounds and on the fish, they enlisted the help of two charter captains: Capt. Nate Ribblett of Eastman’s Docks (Seabrook, NH), and Capt. Kevin O’Maley of Connemara Bay Fishing Charters (Gloucester, MA).

Cod and haddock catch-rate data from the Industry-Based trawl Survey (IBS) conducted from 2016-2019 by the Massachusetts Division of Marine Fisheries. Larger circles indicate higher catch rates and X’s indicate no catch. These findings were used to generate preliminary maps for use by anglers, which were validated during the summer of 2019 through fishing trips on charter vessels.

The validation process, during which anglers used standardized tackle and recorded time spent fishing on the bottom, enabled researchers not only to determine how well their preliminary models and maps predicted catch, but to better translate trawl survey data to catch rates that an angler would actually experience at a given location. For example, even if legal haddock abundance is the same in two areas, catch rates are going to be a lot lower in a spot 300 feet deep versus one that’s 150 feet deep simply because it takes more time to drop to the bottom and reel up fish. The prevalence and behavior of bycatch species—anything other than legal haddock—can also heavily impact catch rates.

“We needed to account for the attack rate, or aggressiveness, of each species in the area,” said Dean. “A trawled net simply catches what’s there, but some species might attack a baited hook more readily than others, which then affects the catch rate, which we can incorporate into our mapping.”

The Massachusetts Division of Marine Fisheries has created a bycatch avoidance tool, for Atlantic cod in the Gulf of Maine (GOM) recreational fishery, in the form of intuitive map products that identify the time and place where the catch rate for cod is low yet legal sized haddock are abundant. Click here to download the maps.