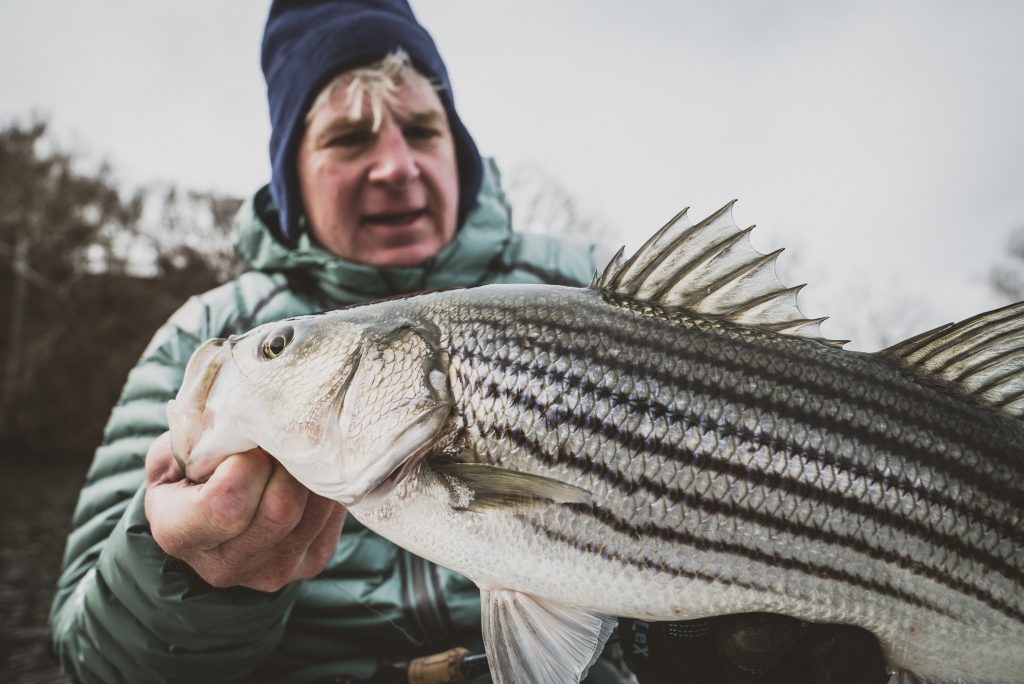 The author displays one of the many school bass he caught on a late-November trip on the Housatonic River.

If you can’t bear to rack your tackle for the season, head for the Housatonic River in western Connecticut for fast action with striped bass that linger through the winter. By Tom Richardson; Photos by A.J. DeRosa

For New England saltwater fishermen, late fall can be a depressing time. Most of the seasonal game fish have high-tailed it south, and it’s simply getting too cold to pursue the remaining resident species. By Thanksgiving, it’s usually time to plan a tropical getaway, tune up the ice-fishing gear or hunker down for winter hibernation.

But there’s another option for anglers who can’t seem to get enough of their salty sport, and I got my first taste of it on November 30 on the Housatonic River in western Connecticut. The river is one a handful of estuaries in the state that host a population of striped bass that stick around through the winter. For whatever reason, these “holdover” bass choose not to migrate south with their brethren come late fall, and remain available to anglers willing to brave the elements.

One such fisherman is Capt. Ian Devlin, a longtime fly- and light-tackle guide in the Norwalk area. Devlin has fished the waters of western Connecticut since he was a boy, and still brings a youthful enthusiasm, as well as a naturalist’s sensibility, to his pursuit of New England’s inshore species. In his 20s, he spent time guiding in Florida, and still uses his trusty 17-foot Lake & Bay flats skiff to fish his home waters.

A good public ramp can be found in Stratford, near the mouth of the Housatonic.

A good launching point for trailer-boaters is the public ramp at the mouth of the river, in the town of Stratford. That’s where I met Devlin on a frigid morning that had the docks slick with rime, the air temperature hovering in the mid-20s. Needless to say, there was no line of other fishermen waiting to launch.

The tidal portion of the Housatonic is an odd mix of industrial buildings and marshland, with highway bridges and train tracks spanning the river. On a frigid November morning, it seemed a lonely, desolate place, an odd setting—and an odd season—for pursuing striped bass. But here we were.

Bundled in down jackets, watch caps pulled low to cover our ears, we picked our way upriver, Devlin monitoring his depthsounder for the telltale marks of stripers, which typically enter the Housy anywhere from late October to mid- November, depending on the weather, and begin gathering in the deeper holes.

Devlin likes to make his way slowly, prospecting with his sounder. When he marks fish, he makes a note of the spot so he can return to it later if he fails to find a concentration of bass farther upriver. He reveals that the fish can be virtually anywhere inside the lower river when they first arrive in early winter, before settling into their more predictable haunts through March.

The Al Gag Whip It Fish is one of the most effective soft baits for winter-over schoolies in the Housy.

Oddly enough, the Housatonic stripers, as well as those that winter-over in the Thames and Norwalk River systems, seem to prefer the cooler river water as opposed to the relatively warmer Long Island Sound. What they feed on during the long, cold winter, or whether they feed at all, is another mystery surrounding the holdover bass.

As we neared the head of tide in Derby, where the Housatonic and Naugatuck Rivers merge, Devlin’s sounder lit up with the marks of fish hugging the bottom. Further evidence of their presence was provided by several shore fishermen, who were busily landing fish from a sandy bank. A few casts later and I hooked my first Housy holdover on a four-inch, soft-plastic Al Gag Whip-It Fish rigged on a half-ounce jighead.

This rig is ideal for fishing in a light current in 15 to 30 feet of water. The important thing is to get the jig down to the bottom, as the fish normally won’t move very far to chase a lure. A slow retrieve is also required. Cast the jig out, let it settle to the bottom then reel it in using a steady retrieve interspersed with gentle lifts of the rod to hop it over the bottom.

The Housy fishery can be accessed by anglers in small boats, canoes and kayaks.

As the tide began to ebb, Devlin moved us steadily downriver. We hooked fish on virtually every cast as peregrine falcons and blue herons regarded us from shore. Eventually more fishermen arrived, some in kayaks, but there was plenty of room—and fish—for all. Indeed, there must have been well over ten thousand stripers in the river. Most weighed a few pounds, with a few pushing the upper 20-inch mark, but Devlin has taken much bigger fish in the river—up to 25 pounds. In past years, bass up to 40 pounds have been pulled from the Housy, mostly at night on large soft-plastic lures. Occasionally, abeit rarely, Atlantic salmon are also taken in the lower river.

Since the majority of holdover fish are schoolies, Devlin recommends a light spinning reel filled with 15-pound-test braided line and a seven-foot, medium- action graphite rod. The leader is three feet of 12- to 15-pound fluorocarbon, connected via a double uni knot, Alberto knot, Slim Beauty knot or Bristol knot.

Weighted Clousers fished on deep-sink lines are often needed to reach holdovers in 30 feet of water.

Devlin and I fished through the end of the dropping tide, eventually switching over to nine-weight fly gear. A deep-sink line or shooting head is mandatory for reaching the bottom-hugging fish, and a large, four-inch Clouser Minnow provides the right kind of profile and action the fish like. Large Deceivers also work and are easier to cast, but take longer to reach the right level.

Add me to the list of fishermen that Ian Devlin has introduced to a new and different world of striper fishing. My day on the Housatonic was an eye-opening—if bone-chilling—experience, for sure, and a good example of how you can always learn something new when it comes to fishing—and stripers.

Dress warmly for winter fishing and use caution when moving about the boat, especially if fishing alone.

The winter holdover fishery is fun, but only if you dress appropriately. Wear layers of clothes, from thermal underwear to full-on insulated jackets. Other items include warm socks and boots, an insulated cap, and a balaclava facemask. Also pack some chemical hand and toe warmers, the type used for skiing. Safety is key as well, especially if fishing alone. Wear a lifejacket and carry a sound-signaling device.

A few years ago, Ian Devlin rescued a kayak fisherman who capsized in the river and was rendered immobile after just a few seconds in the water. Hypothermia sets in faster than most people think, so use extra caution when fishing in winter.

Capt. Ian Devlin hefts a big holdover taken on the Housy, proving that some trophy fish linger inside the river. Photo Ian Devlin

Go with a Pro

If you’ve never fished the Housatonic holdover fishery, it’s a good idea to learn the ropes from a pro like Ian Devlin (above), who also runs guided trips in the Norwalk Islands. He can be reached at (203) 451-9400 or via his Facebook page.