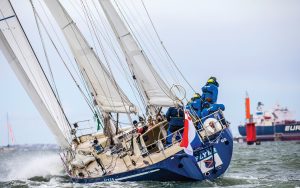 Flyer is the 68ft S&S-designed ketch that won the 1977/78 Whitbread, and last year returned to racing after four decades following restoration

Flyer is one of those yachts that needs little introduction. Designed for the 1977 Whitbread Race by Sparkman & Stephens for Dutch skipper Conny Van Rietschoten, the 68ft aluminium ketch went on to win overall on corrected time.

Van Rietschoten famously went on to win the 1981/82 race with his larger Flyer II, becoming the only skipper ever to win two of the round the world races, and confirming the Flyer dynasty’s place in yachting history.

Flyer was designed as a one-off, but is an evolution of the successful Swan 65. She gained a couple of feet of waterline length, lost a tonne of displacement, carried more sail area (without any rating penalty), and was beamier aft than the popular Swans. She also sported a fin keel and a highly functional doghouse for ocean racing. She saw off her nearest rival in the 77/78 race, the Swan 65 King’s Legend, skippered by Skip Novak.

Tough conditions in the 77/78 Whitbread

After her success in 1978, the original Flyer had a radical refit for the 1981/82 Whitbread, in which she was entered as Alaska Eagle. Her rig was changed from ketch to sloop and the doghouse removed, with the stern extended. The modifications did not improve the yacht’s performance and she finished well down the fleet.

After the race she was donated to an American sail training college and spent nearly three decades working hard on the American west coast, sailing as many as 10,000 miles per year.

In 2014 she was brought back to Holland by a charitable foundation, which began a major refit at the Royal Huisman yard where she was launched in 1976. The yacht was stripped back to the bare aluminium hull and shot blasted, while the design team retuned to the original S&S drawings in a bid to restore her to her Whitbread form, including remodelling the stern.

This is my home for the next eight to nine months. It is still hard to believe, even though I…

Can you improve on perfection? The Sparkman & Stephens-designed Swan 48 is widely considered to be one of the most…

The ketch rig was reinstated. Gerard Schoostra, who skippers the yacht, says that they found her original mizzenmast in a barn in Holland, but decided to replace it with a new one.

“In order to preserve the boat for the future you have to sail it, and so we decided to put on a new rig to guarantee her performance,” Schoostra explained. Flyer also gained an all-new custom-designed main mast, and other original design features such as the doghouse were remade.

The newly restored Flyer was relaunched in August 2014 and one of her first tasks was to carry Conny van Rietschoten’s ashes to be scattered over the North Sea waters, as he had requested before his death in December 2013. She went on to put in a guest appearance at the Volvo Ocean Race start, and was used for charitable and youth sailing.

But Flyer was created to race. In 2018 she lined up against some other former Whitbread and Volvo Ocean Race designs in the fairly relaxed Legends Race from Gothenburg to The Hague.

However, last year the crew decided to put Flyer firmly back into the world of offshore racing by embarking on a RORC campaign, taking in the North Sea Race and 600-mile Rolex Fastnet Race, which she finished in just over three days, 43 years after her launch.

Flyer retains many of the trademarks of her era, including a double cockpit layout – the main working area being midships, with a separate helm station and secondary cockpit abaft.

By modern standards the cockpit area is surprisingly small, given that in her Whitbread days Flyer would have sailed with 12 aboard, and there are no fewer than 24 winches on deck. “And when we’re sailing downwind, we’re using 23 of them,” says Schoostra.

Her original coffee grinder pedestal winches were restored, while the primaries are now three-speed Lewmar 90s. Flyer still carries two enormous spinnaker poles, although these days she is rigged for dip-pole gybes, and still regularly flies a 160m2 blooper alongside her 260m2 spinnaker.

The headsails are currently set on furlers, although Schoostra had his eye on a new suit of racing genoas when we visited the boat in Plymouth after the 2019 Fastnet.

One of the few deliberate deck modifications Schoostra specified was to replace the original sliding hatch “because they always leak” with a custom bow hatch. The new hatch keeps the water out, but after 600-odd miles of bashing across the English Channel and Celtic Sea, Flyer’s deck was dotted with duct tape to keep the water out of her 43-year-old structure.

Van Rietschoten was a big believer that crews should be able rest properly to perform at their best, and down below Flyer is designed to be both functional and comfortable for ocean racing.

Aft of the main mast the interior is original, and includes two cabins for the off watch crew to sleep in. The bunks are quiet and cosy, screened off from the main saloon with doors for privacy, and still allow the crew to hot-bunk in relative comfort.

Doors to the two off watch cabins – a sewing machine frame could be fitted between them for sail repairs. Photo: Jack Watson / Yachting World

Between the two a frame could be constructed to support a sewing machine, allowing the crew to pull Flyer’s vast sails along the companionway and make repairs.

Scratches and dents are still visible on the panelling from where the crew wrestled with repairs in the midst of the Southern Ocean some 40 years ago.

The enclosed galley allows for proper meals to be cooked and includes the original custom stove, while the dining area seats eight, allowing a whole watch to sit down and eat together.

Flyer carries special wedge-shaped mats that can be added to the table so crew can balance their plates on a relatively flat surface when heeled.

Flyer was originally built with a forward heads, but with 36 sails on board it was taken out before the Whitbread in order to make more sail locker room. Nowadays, with just 10 sails to carry, there is room for the heads to be reinstated.

There is a heated wet locker, an impossibility on any racing yacht these days, and every crew member also had a named personal locker.

The skipper and watch leader have their own cabins with easy access to the wheelhouse – in 1977 Gerry Dykstra (now one of the world’s most celebrated yacht designers) was navigator and watch leader.

These days the navigation station has gained modern displays and laptops, but some of the original gauges are still in use, along with the wall-mounted pencil sharpener Dykstra and Van Rietschoten would have used before plotting thousands of miles on paper charts.

The navstation is also the home of the competitors’ plaque, which Van Rietschoten received at the end of the 77/78 Whitbread, “so Conny is always sailing with us,” adds Schoostra proudly.

First published in the March 2020 edition of Yachting World.