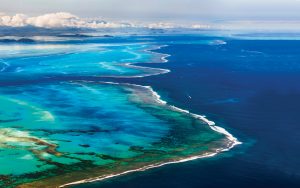 “OK, this time you’ll do it, right?” Wietze asks, full of hope that this time I’ll grab the mooring buoy without a hitch. I’m totally focussed on the white buoy bobbing right in front of us.

I mentally prepare the mooring lines in my left hand to go through that ring. But just as we are 3m away from the mooring, a pig surfaces, a big, fat, grey pig. It looks me straight in the eye and says: “Pffff!” I am stunned. “There’s a pig!” I yell at Wietze.

“A what?” And then I’ve missed the buoy and have to do another turn. The second time it all goes well and ten minutes later the stillness of this sunny day descends around us.

“Now what did you say about a pig?” Wietze asks me. I open my mouth to tell him, when it hits me – it’s not a pig, it’s a manatee! We both dash outside and there he is again, swimming slowly around our boat before making a majestic dive to the grassy patch behind us. Welcome to New Caledonia.

“Are you going to Vanuatu?” a lot of people asked us when we were waiting for a weather window in Opua.

“No, we’re aiming for New Caledonia, so we have more time there,” was our answer. As always on a circumnavigation, you have to pick and choose where you go, and we feel we are richly rewarded for making this choice. After an uneventful crossing, we see Mount Doré vaguely in the early hours of the morning. The VHF comes to life with French chattering.

Buying a boat, sailing across the Atlantic and then exploring the Pacific, before selling it for the purchase price in…

You can lose a lot of friends when you’re sailing across the Pacific. After the first couple of photos you…

The pass through the reef is easy to spot (the flat bit between the massive rollers) and the Amedée lighthouse beckons with her arms of light. As soon as we are inside the reef, the sheer size of New Caledonia hits you. It takes 13 miles to get from the reef to the capital Nouméa. And all the time you feast your eyes on innumerable shades of blue which the morning sun reveals.

“Did you know that it is only slightly smaller than the Great Barrier Reef?” I ask Wietze while I read through a cruising guide. “And a World Heritage Site also. Lots of protected coral and wildlife”. He nods, trying to avoid hitting one of the many anchored boats outside Port Moselle, one of the two marinas that provide check-in facilities.

Port Moselle has one dock set aside for visiting yachts. The rules are strict in the busy season: three nights maximum stay. That’ll give us plenty of time to clear in and have a good look around. Clearing in is a breeze: a brisk walk to Immigration (two forms, two stamps), Customs is handled by the marina (one form) and the biosecurity officer comes on board. Our vegetables can stay; she only takes one potato.

Within two hours everything is done at no cost at all. All forms are French/English and all the people involved speak English in a very charming French way. We feel like we have found Paris in the tropics.

The market is next to the marina and we stock up on delicious papayas, melons, bananas, veggies, fish, all mouthwateringly fresh and colourful. The local produce is reasonably priced but everything imported is breathtakingly expensive.

We wander through Nouméa and love the Place Cocotier (Palmtree Square) where there always seems to be an event going on. The little museums are gems where there is lots to learn about New Caledonia’s history. Having a little French cup of coffee on a terrace is the best start to the day imaginable here.

Our three days pass very quickly and soon we find ourselves begging for more at the marina office. “No, please go,” a local sailor says to us. He grabs my elbow and points at the chart on the wall. “Look here: protected anchorages on the little atolls. And here, Île des Pins. World class, you have to go and see it. And here, Prony Bay, you can spend a week there.

“Go, and come back after a month. Or better, after a whole season. It is such a shame that most cruisers come here for only a few weeks.”

We decide to take his advice seriously. One more round of the market to stock up on fresh goodies, and late in the afternoon we cast off. A whopping four miles from the capital is the first atoll, Îlot Maître, a cute little island surrounded by a reef. To avoid people anchoring on the coral, the French government has laid hundreds of free mooring buoys all over New Caledonia.

They can take boats of up to 10m in all wind strengths; bigger boats have to go elsewhere when the wind picks up over 20 knots. We tie to a mooring and enjoy the sun setting. No green flash on the horizon, but the green flash of a very French bottle of Chablis on board.

We spend a week exploring. While we enjoy a picnic lunch on the beach of Île Amédée, where the old metal lighthouse proudly stands, a fellow cruiser walks over and asks: “You’re going to Île des Pins too tomorrow?” We shamefully admit that we haven’t been pulling up our weather charts in the past days. Happily cruising around in the benign tradewinds has made us lazy. But the wind is veering to the east. Now is the time to go.

The next morning we are on our way at first light. We sail 40 miles upwind, a long slog against a steady ocean swell. “I sure hope that it is worth it,” says Wietze sourly.

Once we turn into Kuto Bay we know that it was worth every minute. We sail into a wide, sandy bay, palm-fringed with an inviting terrace right in the middle. The anchor sets beautifully, we inflate the dinghy and off we go.

We run into a local guy who introduces himself as William. “I’ll take you to go sailing,” he says with a smile. Wietze points at our boat: “We know sailing, my friend.”

“No, not the sailing we do here,” William persists.

So the next morning at 0700 he picks us up from the beach. We wade through the water to Bernard’s boat. It is a classic pirogue, made from the trunk of a pine tree. Sailing on a log is interesting, but Bernard manages to make remarkable speed with it. A turtle can only just dodge us when we thunder downwind.

Old and new: sailing with a traditional pirogue outrigger canoe – which also has an outboard motor

Bernard steers his nimble craft with a large paddle as an oar. It turns on a dime, as we find out when we race past a massive rock, while Bernard chats about his tribe. He is Kanak and a member of one of eight tribes on the island. The total population is less than 1,500, so the tribes are relatively small.

Another pirogue sets off from the beach and apparently it is the same with Kanaks as with all other sailors: two boats on the water is a race. We’re having lots of fun comparing the speed and the wind angle of both boats. After two hours, we declare Bernard’s red boat the winner.

He drops us off at a beach, from where we walk through the forest to a river. Then we follow the riverbank for about a kilometre before we get to La Piscine Naturelle (the natural swimming pool). Again, one of those unexpected gems: white sand, spectacularly blue water filled with colourful clams, coral and tropical fish.

After snorkelling to our hearts’ content, we walk back along the river to the road. William picks us up, his face beaming with pride: “This was special, right?” It really was.

A lovely downwind sail brings us to Prony Bay. It is as if we enter a different world with lush green hills and red earth. Mangroves show their feet at low water. It’s a mysterious landscape, I feel as if fairies could come out of the bush any moment.

The people of New Caledonia have a special word for this red earth; they call it ‘boue rouge’. When things have their own word, alarm bells should go off. The boue rouge is the most amazing mud; it sticks to everything and water won’t wash it off. The non-skid on our deck will bear the boue rouge badge of honour for years.

Vegetation clings to rock formations on the reefs that have been sculpted by waves over the millennia. Photo: Blaine Harrington III / Alamy

For the Kanak people, there are many sacred sites in this bay. Anchorages are all a convenient four or five miles apart, and from almost every beach there is a marked track leading to a lighthouse or hot spring. We walk for hours and can’t stop being amazed at the abundance of flowers and unusual plants.

After weeks of pottering around its bays and islands, we were convinced our decision to focus on New Caledonia was the right one. Early in the season the tradewinds are not as strong, so the range of destinations is much wider.

In the marina office we run into the same local sailor again. “Did you like it?” he asks with that special grin of barely hidden superiority. “Yes, we did,” we say.

New Caledonia is a French Overseas Territory. Although French is the official language, most people speak (or at least understand) English.

Clearing customs is a straightforward process which can be dealt with in English, as most forms are in two languages, and most of the formalities can be handled by two marinas: Port du Sud and Port Moselle.

Channel markers and other navigational aids are maintained to European standards, but it pays to have detailed and recent charts of the lagoon.

The price level of marinas is high, as is as eating out, but with some careful shopping it is possible to provision without emptying the cruising coffers.

ATMs are widely available, and credit and debit cards are accepted almost everywhere.

Janneke Kuysters and Wietze Van Der Laan left the Netherlands in 2013 with their Bruce Roberts 44 Anna Caroline. They have crossed the Atlantic, sailed the Americas up to Alaska and cruised the Pacific extensively.

First published in the September 2020 issue of Yachting World.