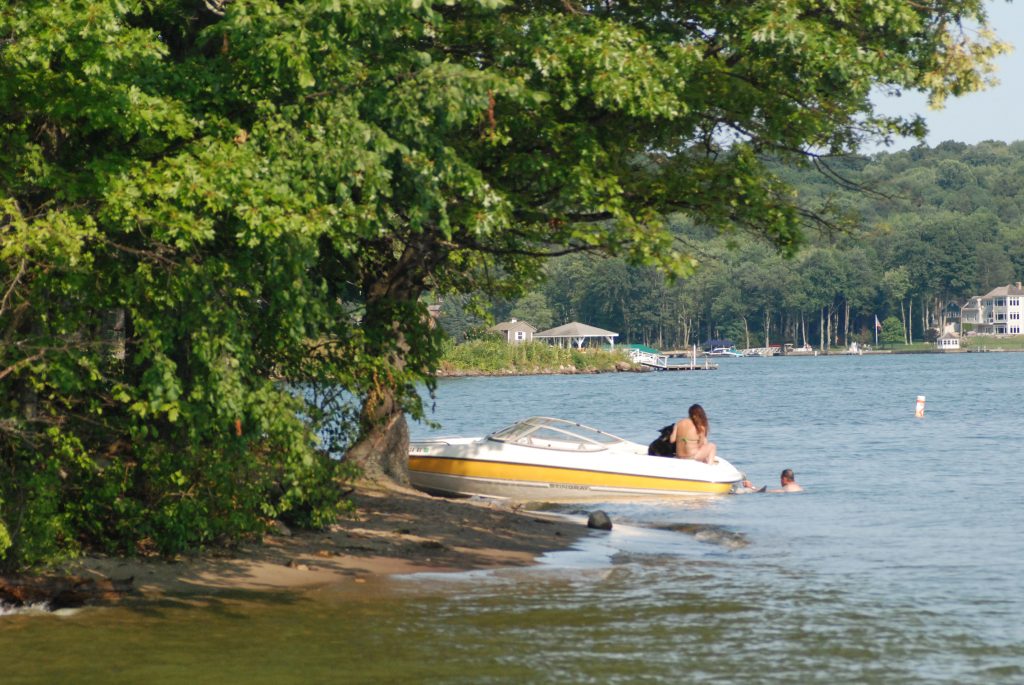 Having boated on Candlewood Lake for some 18 years, Brookfield resident Ken Perry has witnessed an evolution in the local boating scene: the boats themselves have changed, and so have the activities.

Along with newer, bigger and more colorful boats, Perry has noticed more families spending time on the water engaged in watersports instead of just lounging around.

“People used to just cruise around and then drop anchor,” says Perry. “All of the sudden, it seemed everyone had a tower on their boat and their kids strapped to wakeboards.”

Of course, there are still folks who prefer to kick back in a quiet cove, and that’s the great thing about Candlewood: It’s big enough to accommodate boaters with many different and divergent interests.

Created in 1928 by the Connecticut Light and Power Company as an electricity-generating source, this manmade, 5,420-acre lake—the largest in the state—is bordered by the city of Danbury and the towns of Brookfield, New Fairfield, New Milford and Sherman. The name comes from New Milford’s Candlewood Mountain, which in turn was named for the Candlewood tree whose sapling branches were sometimes used as candles by early settlers.

Candlewood is home to some trophy smallmouths. Photo Tom Richardson

For many boaters, Candlewood is the ideal place to spend the summer. “There’s a bunch of little islands here where people can beach their boats, as well as secluded areas to drop anchor and have a good time,” explains Chris Perry of Candlewood East Marina. “This part of the lake attracts a mix of boaters, from fishermen and Jet Skiers to sailors and day-boating families.”

For those interested in watersports, there are open areas that provide a good venue for wakeboarding, waterskiing, wake surfing and tubing, including the waters off Hollywyle Park in New Fairfield. A small cove in the same area is a favorite spot to anchor and swim, according to Perry. Another popular hangout is Chicken Rock in Sherman, where boaters gather to socialize, climb the rocks and jump into the water.

Candlewood East Marina is a boating hub on the lake. Photo Tom Richardson

Lake for All Seasons

Bruce Powers of Katonah, New York, some 30 minutes from Candlewood Lake, sees the lake as a year-round retreat. What he likes most about Candlewood is its hidden nooks. “You don’t feel like you’re driving around in circles,” says Powers, who often takes his Cobalt bowrider to several spots in the course of a day, working his way from the marina all the way to Sherman and back down from Pine Island.

Ken Perry, who runs a Nautique G23, uses his boat for a variety of activities, from watersports to simply hanging out at the islands. “You can always find something to do or some place to go that matches the mood you’re in that day,” he says. “It’s great to get up to the islands, spend time with neighbors and let the kids have a blast.”

In the fall, pontoon-boaters and kayakers often enjoy foliage cruises, and Perry himself tries to stay on the water as long as he can, often extending his season into November.

Naturally, Candlewood is a major destination for trailer-boaters, but is restricted to boats under 26’ unless approved by special permit. The 2 main ramp options are Lattins Cove in Danbury and Squantz Cove in New Fairfield. If you need gas, Pocono Point Marina in Danbury, Echo Bay Marina in Brookfield and Gerard’s Water’s Edge Marina in New Milford all have fuel docks.

The Candlewood Lake Authority is charged with keeping boaters safe, and maintains a 45 mph speed limit during the day. The limit drops to 25 mph from a half hour after sunset to a half hour after sunrise. No-wake zones exist in Lattins Cove, from the southern end of the cove north 2,500 feet, and in Squantz Cove, from the causeway south 1,500 feet.

Any ledges and rocks are well marked, but boaters new to the lake need to pay attention to the buoys and give the hazards a five to ten-foot berth. A detailed map and updated chart plotter helps, of course. The former is published by Fishing Hot Spots, and shows everything a boater needs to know—except for places to eat.

Delicious clam platter with fires at Down the Hatch.

If you’re on the hunt for a dock-and-dine, the only option is Down the Hatch in Brookfield. It offers outdoor dining from April through October, and its menu features burgers, appetizers, sandwiches, wraps, and salads.

Of course, there are plenty of other dining options near the water. Many can be found on Candlewood Lake Road, including Mangia Mangia, an Italian restaurant; Al’s Cookout, an American pub; and Nimer’s White Turkey Pantry, a deli. In Danbury you’ll find Widow Brown’s Café, a popular pub and restaurant.

For newcomers, Powers encourages them to get a map and explore the whole lake before settling on one or two spots as your favorites. After all, Candlewood is huge, so you’ll need to put in some time getting to know it. But that’s a good thing. As Powers says, “Any time you’re on the water is a good time!”

Candlewood Lake is restricted to boats under 26 feet unless special authorization is granted by the state DEEP. Also, a speed limit of 45 mph is in effect during the day, and a state fishing license is required to fish the lake. Boats and trailers must be rinsed at haul-out to reduce the spread of invasive species. For more information call (860) 354-6928 or visit candlewoodlakeauthority.org.

Great source for a detailed map of Candlewood Lake, including boater access points.

Candlewood’s only dock-and-dine option. Get there early on summer days, or you’ll need to wait for dock space to open up. Open May to October.