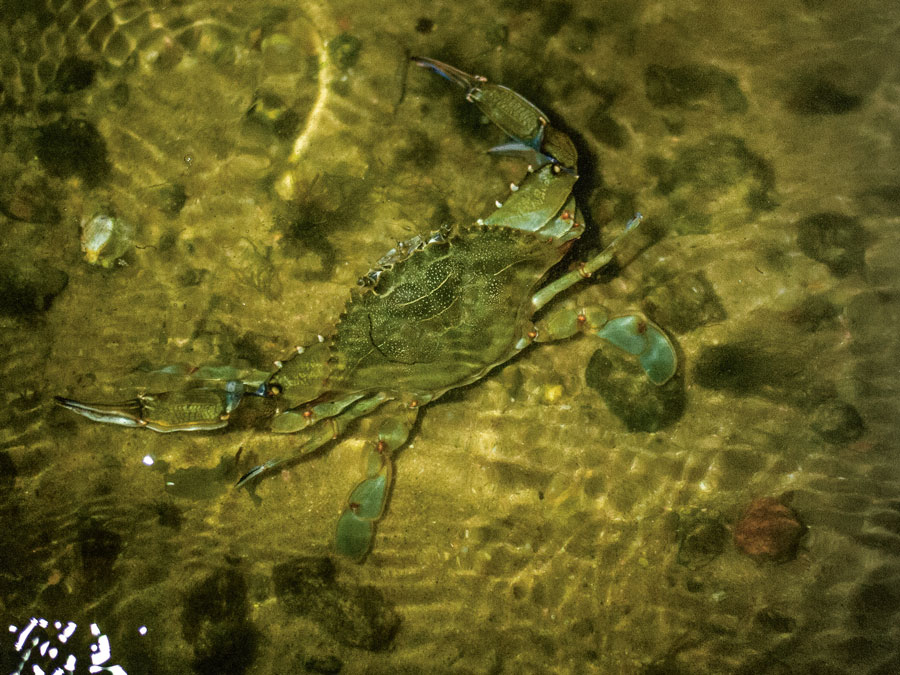 The pull-off at the end of the road is empty, as I expected it to be at 11:00 p.m. I open my trunk, pass over the rigged surf rod, and reach for the long-handled wooden net and bucket. Tonight is a crabbing night.

Once upon a time, my crabbing involved handlines and collapsible traps, frozen bunker, and rented tin boats. When the base of my crabbing operations moved from New Jersey to Cape Cod, I learned that these essential crabbing implements weren’t so essential up here. I toiled away in the marshes during the day for a few scant keepers while my co-worker, Andy Nabreski, filled buckets with delicious crustaceans. I tried different marshes, bays, ponds. I bought a commercial-grade crab pot and a permit for it and, still, a blue-claw feast eluded me. Eventually, Andy let me in on the secret—go at night.

Once upon a time, my crabbing involved handlines and collapsible traps, frozen bunker, and rented tin boats. When the base of my crabbing operations moved from New Jersey to Cape Cod, I learned that these essential crabbing implements weren’t so essential up here. I toiled away in the marshes during the day for a few scant keepers while my co-worker, Andy Nabreski, filled buckets with delicious crustaceans. I tried different marshes, bays, ponds. I bought a commercial-grade crab pot and a permit for it and, still, a blue-claw feast eluded me. Eventually, Andy let me in on the secret—go at night.

Like deer, blue crabs stop in their tracks if you shine a spotlight on them.

Crabbing at night wasn’t a thing in New Jersey, at least not that I knew of. That’s probably because New Jersey is closer to the blue-crab factory of the Chesapeake, and there’s a more robust population there than in New England, so daytime tactics produced just fine. I’ve since learned that nighttime crabbing is popular on Long Island and prohibited in Rhode Island—likely due to its effectiveness.

Andy’s approach to blue crabbing is surprisingly Spartan. He uses no boats, no traps, not even any bait. He hits the salt ponds with a net, a light, and a container for the crabs. His tactic couldn’t be simpler: illuminate a crab with the headlamp and scoop it with the net.

Blue crabs, like many predators, are more active after dark. They emerge from eelgrass and weeds where they hide during the day to scuttle close to shorelines and snatch spearing and mummichogs or scavenge fallen fish. This brings them into knee- to waist-deep water, often right against the shoreline or sod bank.

A long-handled, small-diameter net with sparse netting is ideal because it can move quickly underwater.

I silently cheer the lack of wind, which makes spotting the crabs easier, but my celebration is cut short by the feeling of a small chunk of my flesh being removed by a no-see-um. However, a few (or few hundred) bug bites are well worth it if the following evening finds me cracking shells in the glow of a citronella candle on my back deck.

I wade knee-deep into the water and flick on my headlamp. (I added a pair of fresh AAs before leaving the house because during a night of crabbing, the headlamp stays on the entire time.) I begin panning with the light and walk slowly along the shore. My pace is moderate – slow enough that I’m able to thoroughly scan the area, but not so slow that the silt and sediment I kick up drifts in front of me and affects my visibility.

The first crab appears almost immediately. Its olive-brown shell blends perfectly with the surrounding mud and vegetation, but its white “face” shines in the beam of my headlamp. Blue crabs have a “deer in the headlights” reaction at night, freezing as the light fixes on them. Only its mandibles move as it picks away at a smaller, deceased crab. With the bucket in my left hand, the net in my right, I slowly reach the net toward the crab, keeping my headlight directly on it. I get the net within a foot of the crab and it still hasn’t moved, so I jab forward, aiming for the bottom behind it, and quickly pull back. I can see the white of the crab’s bottom as it hits the mesh, and after assessing whether it is big enough that I don’t need to measure it, I flip the net over the bucket. I hear the scrabbling and clicking as the enraged crustacean scuttles about the bucket. I reach down and pull a glob of cabbage weed off the bottom and toss it into the bucket. The damp seaweed will keep the crabs calm and wet throughout my trip. Without sporadic layers of seaweed mixed in, the crabs would tear each other limb from limb…literally.

Adding seaweed to your crab caddy will limit the carnage that ensues when packing angry crabs into tight quarters.

Blue crabs move very quickly from side to side, so the net has to be faster. I prefer to face the crab head-on, pulling the net from behind the crab toward me. I miss about one in three crabs on my first trip of the season, but by midsummer, my form perfected, I rarely miss any.

While the blue crab is the king crustacean from New Jersey south, in New England, it’s a distant second to the American lobster. For that reason, there are few crabbers to compete with in most Massachusetts backwaters. My main competition for the crabs on this particular salt pond is a river otter. In March, I saw a road-killed otter near the highway exit for my crabbing spot, and I secretly, guiltily, hoped it was him. It wasn’t. I approach a long-forgotten floating dock and see the evidence of his hunts strewn across the wooden slats. A dozen or more crabs—size limits and egg-bearing be damned—missing their backfin section, with claws—all that delicious meat in them—left to fester in the hot summer sun.

I add three more crabs to the bucket and prepare to scoop my fifth keeper when I spot the splash of red on the tips of the crab’s claws. A female.

There’s no good reason to keep female blue crabs, even the biggest ones. First, they have less meat because they lack the large, “lump” backfin meat of the males, and have smaller claws to boot. I was once told, at a roadside seafood shack in Southern New Jersey, that the female crabs have a sweeter meat, which is why they are used in the regionally popular she-crab soup. This isn’t exactly true. She-crab soup, when conceived in Charlestown, South Carolina, to impress a visiting President Taft, used the roe from a female crab to color and flavor it. Since keeping a female crab with a visible egg “sponge” is illegal, there is no good reason to harvest them. Leave them to continue to reproduce and keep your crabbing spots well stocked for future visits.

A female blue crab is easy to identify by its large, wide tail. Most crabbers opt to release females.

Many of the crabs I scoop are “rusty,” with shells tinged with brown and undersides scratched and discolored. This is a sign that it’s been awhile since the crab’s last molt and it’s likely to be heavy with meat. Crabs with green shells and snow-white bottoms have recently molted and have less meat inside their shells. When the crabbing is good, I set these crabs free, but when my bucket is light, I bring them home.

On this night, however, my bucket is heavy within an hour. The whole marsh is alive and active, above and below the waterline. In addition to blue crabs, I see eels, stripers, needlefish, spearing, blowfish, and thousands upon thousands of grass shrimp. I hear something in the reeds and see the eyeshine on a mink reflecting at me when I turn my head. A blue heron squawks angrily as my light disrupts its nighttime hunt.

I have a dozen crabs in the bucket when I decide to turn and head back, then I add five more by the time I reach the shore. Most are so big that I don’t need to measure them to know they meet the 5-inch point-to-point minimum size. A couple are close, though, and after gripping them firmly by the claws, I place them against the notches I made in my net handle to make sure they make the grade. The 17 crabs in the bucket are 8 shy of the bag limit but are enough to feed three of us for dinner, with enough left over for my lunch the following day.

To me, there’s no question about how to prepare crabs. I leave the crab cakes to the pros. I believe I’d be doing myself, and the crabs, a disservice by devoting several hours to catching, steaming, picking, assembling, and frying them for a couple minutes of eating. On a lazy summer afternoon, I vastly prefer it the other way around, with 15 minutes spent steaming and a couple hours spent picking and eating.

The next evening, we eat the crabs outdoors, with a roll of paper towels and a cooler of cold beer within arm’s reach of our seats. We each have a cup of melted butter for dipping the meat, but crabs steamed with equal parts water, apple cider vinegar, and beer are so flavorful that I often don’t want to dip it in anything.

By the time the sun starts to set, my lips are tingling from the gentle heat of the crab seasoning (J.O. #2, please), and the table in front of me is a tableau of spilled beer, fractured shells, and congealing butter. I sleep well that night, with the windows open, dreaming of a summer, and a crabbing season, that never has to end.